While in Greece last April, my wife Carole and I celebrated Easter two weeks in a row-thanks to the Greek Orthodox Church which believes the resurrection occurred a week later than is honored several hundred miles to the northwest. The Orthodox calendar, not unlike almost everything else in Greece, seems to run on its own time schedule. This is particularly true in the Saronic Gulf, where each of the picturesque Greek islands has its own special personality and charm.

Chartering a yacht from Athens, Aigina (Egina), Poros, Hydra (Idra), and Spetses can all be included in a week’s itinerary. While Easter is the most festive time to visit, you might want to wait until late spring or summer when the crystal waters of the Mediterranean have warmed a bit; that is, if you have any intention of getting wet! Because of unpredictable winds, most crewed charter vessels are motor yachts or traditional Greek motor sailers. Our home for the week was aboard the sleek and very comfortable motor yacht Myrine. As with so many of the Greek yachts, Myrine’s crew prepared superb traditional Greek dishes and were quick to share their vast local knowledge, including the rich ancient history of the Saronic Gulf.

We arrived in Athens just in time to witness the Good Friday candlelight vigil. The closing procession is the highlight of the service, beginning near the Acropolis and winding down through the capital city in a river of dancing white lights. The faithful thousands who participate clearly exemplify the vitality of the Greeks; young and old, rich and poor but, above all and in the eyes of God, Greek.

The next morning we set off aboard Myrine to our first island destination of Aigina, just south of Athens. In Greek mythology Aigina was a woman of extraordinary beauty. So much so that she caught the eye of Zeus himself. Abducted from her home, Aigina was transported to what was then a deserted island where she was held captive by the Grecian god who eventually fathered her son. Today, some four thousand years later, the deserted island which held Aigina now has several thriving seaports and is known more for its beautiful beaches and pistachio and olive groves than for its ancient mythology. While there are several ruins on Aigina dating much later than the Helladic era, what I found most interesting is located within the main harbor itself: it is the variety of small colorful Greek merchant vessels bringing all manner of fruit, nuts, vegetables, clothing, etc. to sell stern-to along the main street wharf.

Wandering through Aigina’s narrow cobblestone back streets you’ll find a number of tucked-away courtyard restaurants. Take your time deciding where to eat or have a drink so you can soak up some of the atmosphere, particularly the local stucco architecture. The people on all of the islands are more than embracing when it comes to conversation, particularly at 11 am and 6 pm during “mezes”. This is where time stands still for a glass of that licorice-tasting Greek liquor, ouzo.

For some reason many Americans envision patrons of Greek restaurants constantly dancing on tables and breaking plates by the hundreds. While the Greeks of the Saronic Gulf are generally fun-loving people, this is never the case. It is far better to break the ice with an energetic toast of ouzo than to break plates at a small family restaurant! If you really must break something, there is yet another unique example of Greek Orthodox tradition found at the first of three Easter day feasts which occurs just after midnight mass. At the conclusion of the feast, everyone at the table is given a single hard-boiled egg dyed red. Using the narrow end of the egg, it is customary to attempt to break or crack the egg held by the person sitting across from you. If you are successful in doing this without damaging your own egg, it will bring you great fortune throughout the coming year. There are absolutely no fluffy bunnies involved.

The midnight Easter mass we witnessed in Aigina prior to the feast also concluded with a candlelight procession, albeit more modest than the one we saw in Athens. In this case the Greeks affectionately add sparklers and fireworks to commemorate the joyous occasion of Christ’s triumphant resurrection.

No one in Greece is expected to rise early on Easter Sunday, except, that is, charter yacht crews. When Carole and I finally awoke, just before noon, we found Myrine had left Aigina and was peacefully at anchor a few miles south of our next destination. On the top deck we were introduced to the timely morning tradition of strong Greek coffee. My eyes slowly began to focus on the clear blue water framed by the ancient rolling mountains and we were soon under way once more toward the island of Poros.

As one approaches the main harbor from the south, the hill rising above the township is topped with a Grecian bell tower. The local buildings, with their white walls and blue woodwork, are quite typical of Greek island architecture. Four miles to the east of the main harbor lies the remains of an ancient sanctuary erected in honor of Posideon, lord of the sea. It was here also that the Kalaurian League was formed in the sixth century. The league was comprised of respected seafarers from Athens and the surrounding islands, and emerged as a powerful maritime federation. 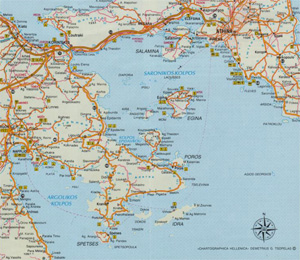 Today Poros is home to a number of gorgeous private and charter yachts, and boasts the largest bareboat sailing fleet in the Saronic Islands. Here we were treated to the noon Easter feast of roast lamb with all the trimmings. The animal is skinned and cooked, head and all, over an open pit as has been the custom since the holiday was first celebrated. Afterwards there was music, dancing, a quick nap and more feasting followed by even more dancing. It’s no wonder the Greeks dance so much; if they didn’t they would be a nation of blimps!

That evening we witnessed the most curious and entertaining ceremony of all: the burning of Judas. Dressed in their finest clothes, locals gather on the water’s edge to sing and dance to traditional Greek folk music, drink enormous quantities of wine and wait for that fateful moment when a stuffed facsimile of the world’s most infamous traitor is placed upon a wooden raft, shoved out into the bay and dramatically set on fire! The citizens of Poros prepare the elaborate Judas raft, complete with noose and tree. As it goes up in blaze, the crowd simultaneously responds with a fervent chorus of cheers and fireworks so emphatic that one is easily caught up in the revelry of the moment, even if there is a certain dark undertone to the whole affair. Participants of our own Charleston Maritime Festival could take a few notes from the Greeks when re-enacting another historic hanging of one Major Stede Bonnet.